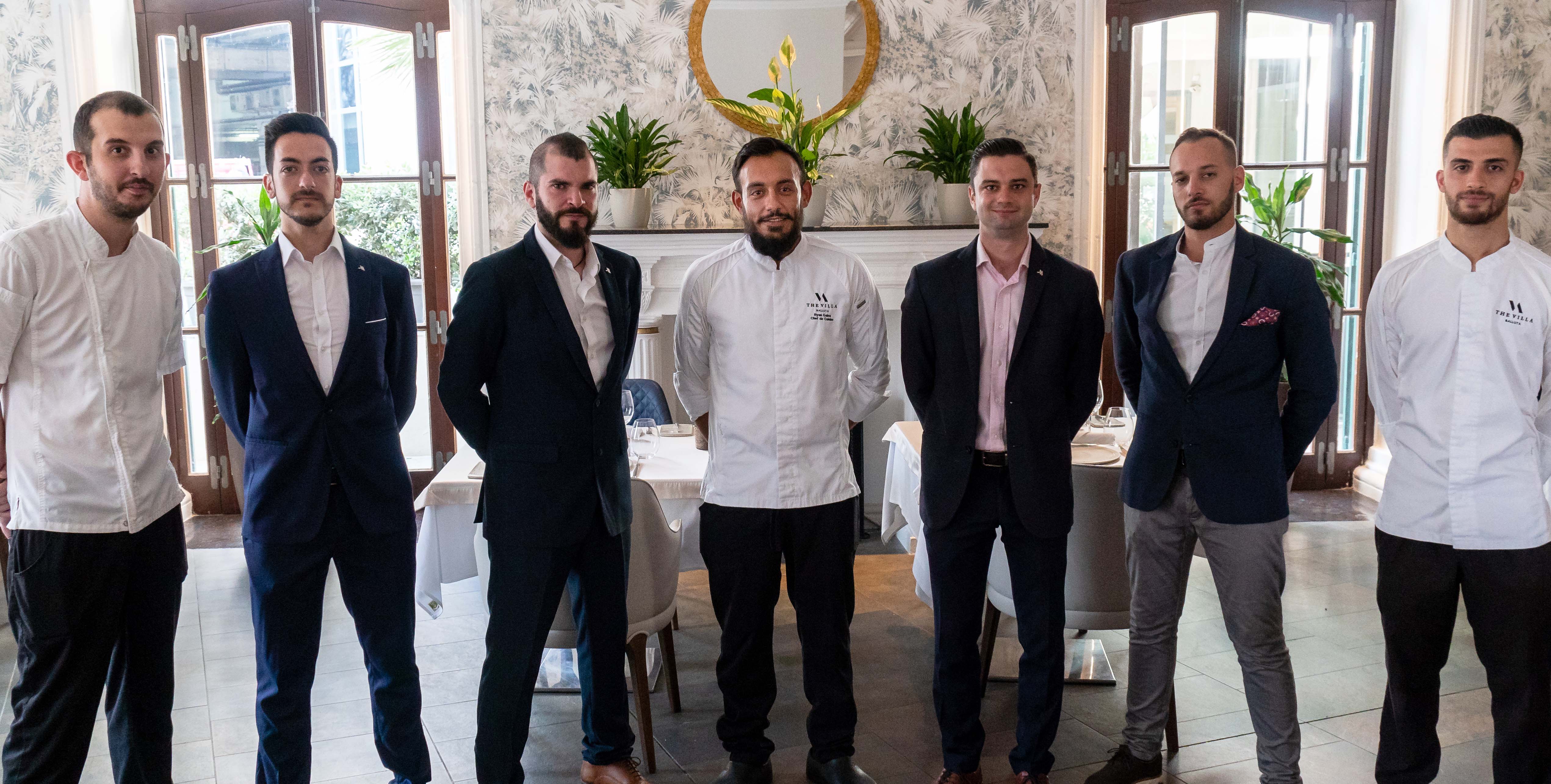 Our Passion at your Service

Team work makes the dream work. That’s a motto we definitely believe in at The Villa.

Within our young, dynamic workforce we have a mixture of nationalities, expertise and characters combined to make the dream team. Led by Executive Head Chef, Adrian Buttigieg our team have won 28 medals and 2 trophies in the latest Malta Culinary Competition. Adrian has also previously been shortlisted for the semi-finals of the San Pellegrino Young Chef of the Year 2017. Also, on the beverage side, Panos Foteiadis, our Assistant F&B Manager, a passionate and renowned bartender, won the national cocktail competition and will be representing Malta for the second year in a row at the World Cocktail Championship, in November 2019, taking place in China. Our achievements speak for themselves so let’s meet the team.

Ryan’s passion for the culinary arts started 11 years ago when he used to help his father in the kitchen. He has broadened his knowledge and acquired specialised skills since this time by working with renowned local and foreign chefs. Ryan creates his menus being inspired by sustainable produce and by respecting the longevity it takes for produce to grow, using all of the ingredients without waste. He has spent 8 years in 5-Star hotels in Malta and also 18 months in a 3AA Rosette classified, fine dining restaurant at a Golf Resort in Northern Ireland.

Having previously worked as a waiter at Le Meridien, Adam has a fond connection with the hotel and is thrilled to now be managing The Villa. With his father being the award-winning chef, Andy Gaskin, Adam is very comfortable in the kitchen. Apart from his educational background, Adam has also gained a wealth of experience both locally within the 5-Star hotel industry and during a four-week stint at the Michelin-starred Belmond Les Manoir aux Quat’Saisons in Oxfordshire. Adam is ready to carry on his father’s legacy, to remain grounded, to treat everyone with respect and to leave an imprint.

“We are thrilled to have someone with the passion, skill set and wealth of experience like Adam to lead the team and be the face of The Villa.
Coinciding with the launch of our new summer menus for both Taro and Nori in the coming weeks, and preparations to open the hotel, Adam has certainly ticked all the boxes.”

Our energetic and passionate Sommelier Dario, works hard and efficiently as part of The Villa team. After having studied in the UK and gained experience in different countries including Malta, Cayman Islands, UK and Italy. Dario has been an Assistant Sommelier working with extensive wine selections at restaurants such as The Chophouse, Ave Restaurant, Kimpton ‘Seafire’ Resort and Spa and also Ristorante La nuova Quercia. Dario is constantly researching new wine trends and destinations to offer our guests at The Villa, the perfect wine pairing combinations with their meals.

Giuseppe had always wanted to be a chef, with a huge passion for the culinary world since childhood and starting his studies in a top-rated catering college in Italy at the age of 14. However, with such a passion to entertain, Giuseppe found the perfect balance and has been a bartender for the past 15 years. Travelling food markets around the world, Giuseppe has discovered new flavours to compliment his style of mixology and has a keen interest in the Asian culture, which led him to botanicals, studying different plants and flowers, allowing him to define his cocktail making as a healthy way to enjoy drinking. Giuseppe has worked and been mentored by Ferruccio Bocus, Founder of the Italian Association of Bartenders and believes in tailor made mixology. He’s a 3rd level Sommelier and is well known in the cocktail industry, specifically after introducing a new mixology concept at The Thirsty Barber, Malta.

After spending 4 years at The Institute of Tourism Studies in Malta, Carl experienced 6 months working in a fish restaurant as part of a leading hotel in Cyprus and also 1 month at the Black Swan 1 Michelin Restaurant. Carl takes inspiration from Tommy Banks, a culinary TV judge and the Executive Head Chef of the Black Swan 1 Michelin Restaurant, where sustainability is at the forefront of their ethos and where they grow most of their own food. During the Malta Kulinarja, a local competition, Carl was awarded with 5 Silver and 2 Bronze medals.

From a young age Michaela has always had a keen interest in the kitchen, frequently watching her mother cook. Her first job was at the Hilton Malta where she spent 3 years working, gaining knowledge and experience before joining The Villa team in 2016. Michaela spent one month at a 212 restaurant in Amsterdam, this was her first time working abroad and she thoroughly enjoyed learning many new skills and expanding her knowledge. During the Malta Kulinarja local competition, Michaela was awarded with 1 Bronze, 1 Silver and 1 Gold medal including a trophy.

So, the next time you visit The Villa make sure to keep an eye out for our dream team, who work amazingly hard to create the perfect food and drinks for our esteemed guests.

Any cookies that may not be particularly necessary for the website to function and is used specifically to collect user personal data via analytics, ads, other embedded contents are termed as non-necessary cookies. It is mandatory to procure user consent prior to running these cookies on your website.